Yesterday when I saw the Des O Gorman orientation video it reminded me of what I believe was the second evolution of Universal Studios Orlando Ghostbusters Spooktacular. In this version (which unfortunately I’ve only ever seen on YouTube long after the fact) an actor portraying my buddy Louis Tully presents to a crowd the idea of starting a Ghostbusters Incorporated franchise. All part of the “Free” business seminar.

When you heard free and “business opportunity of a lifetime” Louis had your attention. I would have been about 14 then. If I had heard that, just as I was entering high school some of my classes would have been different. As an aside I took Psychology in college because I knew it’d be interesting and in a way because of Ghostbusters.

As part of the seminar, Louis tricked, er I mean presented a video titled Be A Ghostbuster.

Do you want a career that’s exciting?

Do you want a job with power and responsibility?

He might have said without, instead of with power. Yeah, we work hard, if we can somehow be less responsible, we’re in.

You want to race into battle and save the worrlld?

We’re Going To Get Letters

Over the guys and Janine’s objections Peter even showed someone’s grandma fully suited up walking across a street with assistance from a walker. If we did that today, the stock would be down and someone would apologize via Twitter.

Once you knew old ladies could bust ghosts, the sales pitch continued with some random excited sales pitch guy. I have no idea where they found him, he probably had some experience as he used his “I learned this in broadcasting school” radio voice.

Yes, now you can run a Ghostbusters branch right in your own neighborhood!

Emphasis on money to show a “branch” can make a lot.

Because rent an spokesperson 15 seconds of fame weren’t up he had to chime in. “It’s that easy!” He’s so unimportant I couldn’t be bothered using the block quote button.

Back in the day when we had like 4 franchises tops, we could afford to provide the following:

If you thought “wow, we’re even getting that sweet 1980s computer equipment” you were going to be disappointed. That was for set dressing and to add perceived value.

This guy keeps talking about making money. Surely he knows a lot about that as people HAD to be paying him to go away.

Yes friends, its your ticket to EaZy Street.

I hope Easy Street is in Compton. Am I going to have to take to Twitter after I publish this post?

Ghostbusters Incorporated wanted to show people from all walks of life (who were miserable at jobs that were going nowhere) could become successful, tax paying Ghostbusters. The three people we’re shown are:

If one didn’t already know this entire thing is a fabrication, they do now. Let’s be honest today, unless this guy went to a culinary school he didn’t have much of a future anyway. By the 2 seconds of airtime GB Inc. gave him, this guy couldn’t manage his own finances, let alone a would be profitable business. If this guy ever did try to become a Ghostbuster, he went back to scrambling eggs a long time ago.

After fighting with Ronald Reagan and a major wall coming down, ghost busting seemed ideal. Around 1992 it was topical and suppose to add more humor to the presentation. Considering the political climate, Gorby might have been ahead of his time.

Once we knew at least three people were successful (I guess) at busting ghosts, them and more Ghostbusters celebrate by jumping up and down in the Florida streets, feeling really good because money is falling from the skies. Aren’t we paid by Visa?

As the presentation is ending, (as in all good infomercials) we finally find out what starting a franchise costs. If one called 1-800-555-BUST they could get a special introductory price for $29,999.99. Don’t forget that $3.50 Shipping and Handling. Even for the time, seems inexpensive. I think we undercharged for shipping. What was the scale of the equipment, 1/6? Hope everyone read the fine fine print.

Training, Yes Have Some 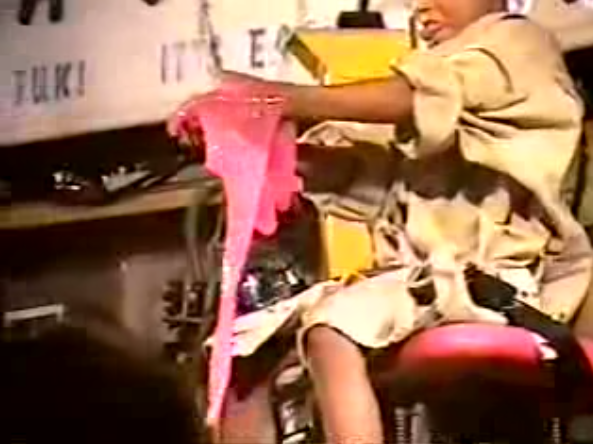 You think we waste any time? I’m sure while we’re getting CA$H from kids and adults alike, Louis (yep, just Louis) began training new rookies (one kid hadn’t even finished elementary school yet!) They’re taught complex math, “slime control,” (is that Nickelodeon Gak?) how to use a “Mental Meter” to read brain waves, and train with a Nutrona Wand. Again, we let Louis do this? 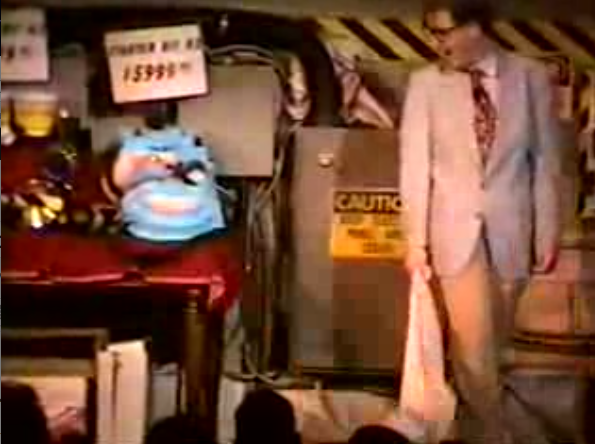 After basic training its off to the new “Ecto-Plasmic Containment Chamber” room. Isn’t that just a basement with the ECU in it? While the crowd is in the room anyway, enough time has passed to remind people what one gets (and for how much) when they purchase a Franchise Starter Kit. Such as:

After Louis accidentally fires off a Nutrona Wand, nearly missing a nice lady who probably wrote a cashiers check for $30K, Walter Peck (who moved to Florida after 1984 and got a job with a Floridian Consumer Board) conveniently shows up to shut down the operation on some chumped up fraud charge. I also didn’t realize Benedict Cumberbatch once worked at Universal Studios. 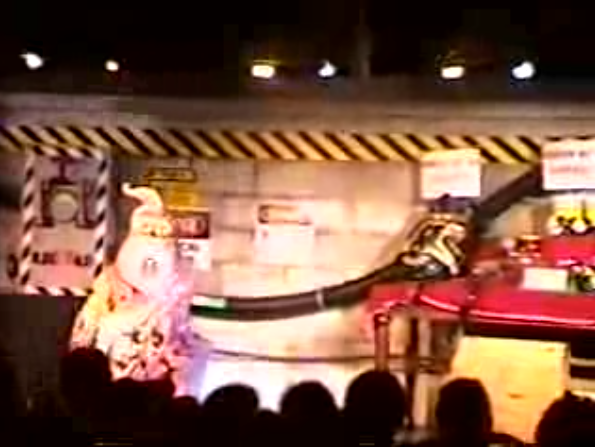 It isn’t long before Louis is evading legal action (good thing this is JUST a “business” seminar) from Wally Wick, Louis hits a switch, the lights go out, its just a mist and a ghost shows up. Looking like our “no ghost” with a Hawaiian (or Floridian) shirt on. Did it get its wardrobe cues from Doc Brown? It was a FAKE to try to fool such government types who wish he had the might of the federal government behind him.

Mr. Pecker who once again (and didn’t learn his lesson years earlier) gets no respect and does something that REALLY should have been familiar to him. Shut down the Ecto-Plasmisc Containment Chamber. NOT THE MAIN POWER SUPPLY!

Ghostbusters and The Temple Of Gozer

Once the warning lights flash and alarms go off for under 60 seconds in the dark, Louis and Peckerhead have just enough time to waste as the Franchise Seminar gives way to the Gozer set from the original Spooktacular show!

Somehow releasing all the ghosts again from Ghostbusters, Ghostbusters II, and 7 seasons of The Real Ghostbusters is enough spectral energy for the return of a doorway where Gozer and her pet dogs once were. Thanks a lot buddy.

Except this time its different too. Because some writer remembered the movie Beatlejuice and said Gozer more then once, the end times were surely near.

Slimer briefly appears, scaring Peck as he crawls away, Terror Dogs return, waiting for…a very large clown ghost? I hate clowns and their ghost versions. It was to throw our memories off as the temple doors open revealing GOZER! Somewhere P.K.E valences were off the needle!

In the years since Gozer was forced back to her dimension, she must have rented The Wizard Of Oz from Interdimensionalflix. Walter Peck tries his best to represent humanity, (ok who are we kidding, just himself) as Gozer has him in her “tractor beam.” When he yells for the Ghostbusters, she sorta lets him go. As the Goz would have much rather made this Ghostbusters III with all due respect to Vigo. 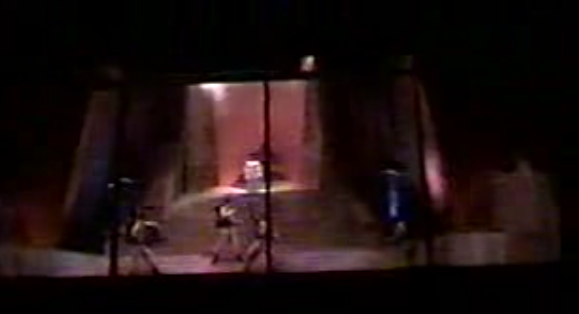 Within seconds Ghostbusters by Kids Incorporated plays from some future Apple cloud and The Ghostbusters finally run onto the roof, sounding like a Kenner commercial. It doesn’t take long for ILM streams to fire from their nutrona wands. Before you can say “Who ya gonna call?,” terror dogs, clown ghost, (YES!) and a multi-headed skeleton are quickly dealt with. Hey, this is Gozer, The Gozerian. The guys have been on this rooftop before. They know this is the real work. What’s that cackling, what’s that roar like noise? ITS THE STAY-PUFT MARSHMALLOW MAN! Can I have an autograph? No wait, aw man they gotta make whip marshmallow again. 😥

Realizing Stay-Puft could potentially destroy the vacation destination of the world, which is WAY more important then the entire planet its “camp fire time.” A bit ironically, that same Ghostbuster (who I guess is Peter) sounds like Leonardo from the classic Teenage Mutant Ninja Turtles cartoon. Egon sounds like his cartoon counterpart.

Of course the Ghostbusters go full ILM on Mr. Stay-Puft’s head until it sorta deflates causing dry ice all around the roof top…set. With Gozer defeated for a second time until the 3:15 show we’re thanked for coming. What else is their to do, sing the Ghostbusters theme song!! As the show wraps up, deep voice announcer guy reminds us franchises are still available in most major markets.

The link to the video I’m sharing is different then the one I have a copy of and used for screen caps. It may or may not include the same exact Seminar/Informercial/Gozer parts. Its from a year later, during 1993.