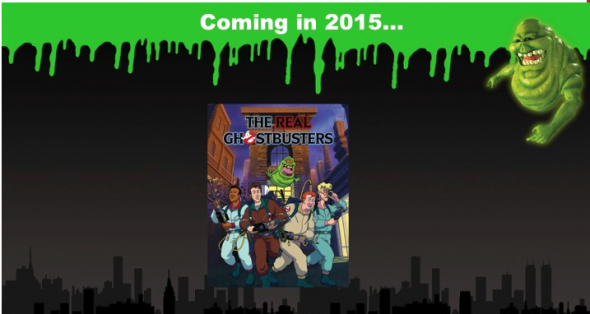 During Mattel/Matty Collector’s SDCC panel it was announced that The Real Ghostbusters figures were coming in 2015. If Mattel was looking to surprise a fan base that generally has grown distant with how one toy company has handled Ghostbusters figures, they succeeded. Mainly because without a complete new movie, ongoing comic, no new current cartoon, and mainstream merchandise in stores I don’t think any ghosthead expected new Ghostbusters figures.

In recent years Matty Collector had made all 4 The Real Ghostbusters in the Mego/Kenner style of the 1970s as part of their Retro-Action figure line. Which was followed up with a Retro-Action Janine/Samhain 2 Pack. As I’ve previously said from a business point of view fans never knew how successful these figures were. Also at the time Matty Collector didn’t seem interested in similar figures to their Ghostbusters lines.

Details seem scarce and Matty seems to have learned their lesson from last year by not showing off something that doesn’t physically exist. I’d imagine they’re also considering leaning towards pre-orders to “gauge interest.” Hopefully if they decide to do that, they’ll give ghostheads and other consumers enough time, unlike the ECTO-1 they wanted to make last year.

END_OF_DOCUMENT_TOKEN_TO_BE_REPLACED

In February QMX announced Ghostbusters Q-Pop figures. For New York Toy Fair physical figures weren’t yet available, only 3D artwork. At San Diego Comic Con QMX had all 4 Q-Pop Ghostbusters on display. I didn’t really know what to make of these figures then. They still kinda look kid versions of the Ghostbusters or what they could look if their was a new animated series.

I’ve still never seen a Q-Pop figure in person, for Ghostbusters these seem to just about perfectly capture what Ghostbusters is and the personalities of each character. QMX even made Slimer, without really having to make him. I just noticed a tiny Stay-Puft marshmallow man with Ray, making these a little more perfect.

We don’t know yet how they’ll be packaged, pricing, or release dates. Hopefully if they do well, QMX will make more figures. Janine from Ghostbusters anyone?