GHOSTBUSTERS™ cereal was already pretty awesome. You already loved Ghostbusters, you loved cereal, how could the experience be any better? Two words that went hand in hand with children’s breakfast cereals, Free Stuff. More known by its less fun name, premium. When it comes to cereal and getting stuff their were different ways kids went about it.

The Real Ghostbusters Cereal Glow In The Dark Door Hanger 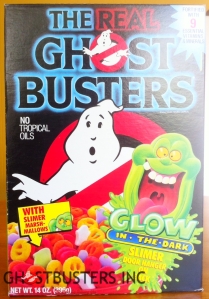 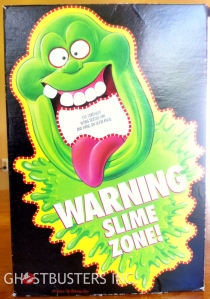 This The Real Ghostbusters cereal premium let you know when you were at a grocery store two things: Slimer will upstage the “no ghost” logo whenever he has the chance. More importantly, Ralston lead kids to believe they both needed and wanted a one sided door hanger made out of cardboard. At least it glows in the dark. By way of solar energy! Wow, the cereal industry was ahead of its time.

We gave it little or no thought, (because “why worry?”) how did Ralston make just that one part of the box glow? Was it safe? Was their a hotline our parents could call? I don’t remember or can attest to in front of a jury of my peers how well a box size image of Slimer glowed. I haven’t tried to test a nearly three decade year old cereal box.

Hey Ralston! I’m onto you in my 30s. “Slime zone” with an exclamation point is adult code where the end result is kids cleaning their bedrooms. No wonder this cereal went away. As a kinda consolation, Ralston provided a one sided cardboard “Back Off! I’m A Ghostbuster” badge. To you, this “flip open” I.D badge was important, adults would only play along while you pretended for so long. You knew it was cool and kept it within easy reach by your The Real Ghostbusters stuff. 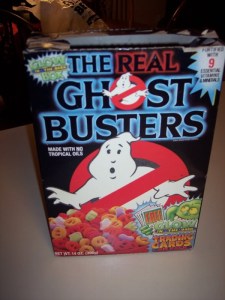 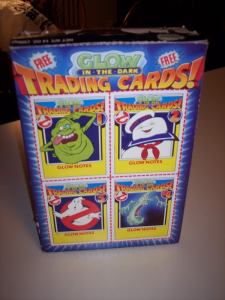 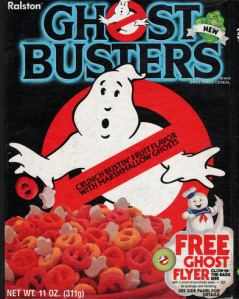 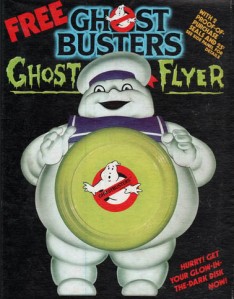 I seem to remember the glow in the dark Frisbee, er “flyer” premium. I don’t think I’ve ever owned it, maybe it was that “bad kid” again.

Ghostbusters Cereal Be A GHØSTBUSTER 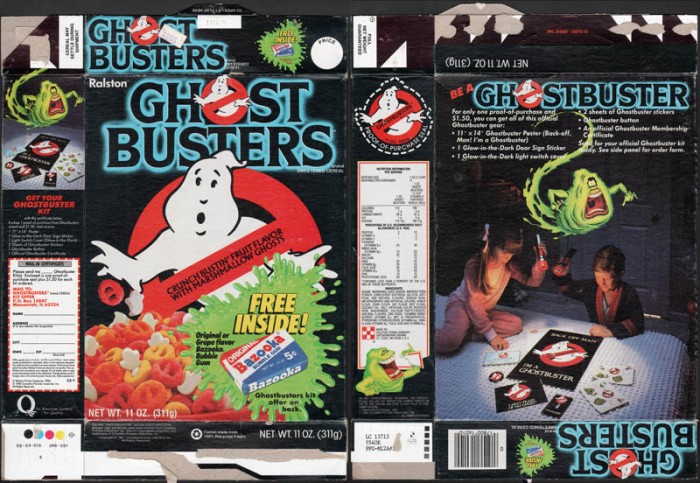 If I didn’t remember owning a large piece of glow in the dark plastic, I really don’t remember an offer from Ralston and Ghostbusters Incorporated to “be a Ghostbuster.” I’ve had the worse luck since 1984 missing the official Ghostbusters Fan Club and a chance as a kid to become a Ghostbuster via breakfast cereal.

From the “free inside” premium we know which food industry (Ecto-Containment link) had more influence. What else could explain the misplaced priorities for one, yes one piece of Bazooka gum. Yeah you might get Grape Flavor. The odds were one in 13,983,816. That’s an exact figure. Even if kids weren’t being offered a start in a dangerous career, a piece of sugary gum was more then enough reason for kids to need this Ghostbusters cereal. Your parents healthy cereal would never give away free gum.

As an aside because I had the access and I could afford five pieces of Bazooka gum at 5¢ each, I’d buy flavored Bazooka gum at Pat’s (which was by School #10) all the time. School #10 was also famous to me because across the street was an historic hospital that had a height and roof area that resembled Dana’s apartment building from Ghostbusters.™

Unlike sending away for a The Real Ghostbusters video cassette or a holographic t-shirt, becoming a Ghostbuster was affordable. If your parents asked you questions you could have told them ‘Look at all the stuff you get in the Ghostbuster kit! And it doesn’t cost a lot.’ Only if you knew the word economical in 1987. For 1 PoP and $1.50 USD trusted adults (we hope) sent you: 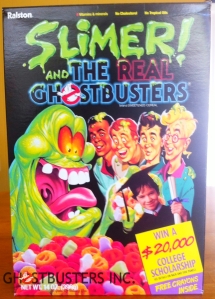 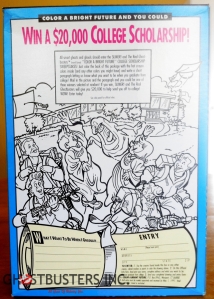 Perhaps their was a reason the Ghostbuster kit came before the chance to win $20,000 USD worth of college education. Maybe in the late 1980s twenty big ones could get a high school graduate through a good 4 year school. Problem is, you’re under 12 and won’t graduate until the future year of 1996. Did the money become a better investment?

How did this work?

Slimer! and The Real Ghostbusters “brand” of Ghostbusters cereal came with “the hot crayon colors.” You would color the back of the box with those crayons (would your entry become null and void if you used Prang? When the fun was over, it was time to get serious with a short paragraph telling adults who don’t know you “what you want to be when you graduate college.” Kids had a 1 and 3 chance of being randomly selected as Ralston actually gave away not one, but 3 college scholarships as part of their “Color A Bright Future” College Scholarship.

I feel like I entered, I only have a vague memory of either doing this or hearing anything from the scholarship deciders.

Anyone reading enter? And better yet, actually win a $20,000 USD college scholarship in the early 1990s? 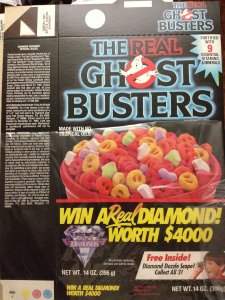 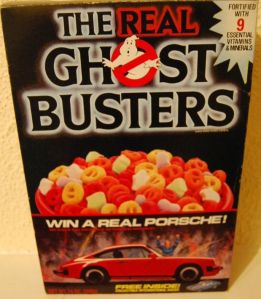 Ralston LOVED filling kids minds with the promise of college scholarships, winning jewelry, sports car, and Kenner The Real Ghostbusters toys. Licensing must have been very good or they had partners with deep pockets. Seriously, a Real (see what they did their?) diamond worth 4 grand. I’d really like to know more about that sweepstakes. I can imagine as an adult the odds were really small for kids to have a chance to win a single diamond worth more then your entire net worth. That’s presuming you had net worth at 9 years old. As a consolation for knowing you weren’t going to win a diamond, this The Real Ghostbusters cereal included a ‘Diamond Dazzle Scope!’ Which was probably a kind of kaleidoscope.

If it wasn’t for the second The Real Ghostbusters cereal box, who would believe me that Ralston also gave..well had kids enter for a chance to win a car. Not any car, a Porsche! It was the ’80s, money was just being thrown into the wind. I really really want to know about that sweepstakes. I find it hard to believe Ralston actually gave away 1 Porsche 944 or 911, even if it was red. While I have no memory of the diamond, I can remember the Porsche sweepstakes. It was promoted across Ralston’s cereal brands.

Doubtful if anyone reading won either of these, I’d be interested in hearing about the experiences. 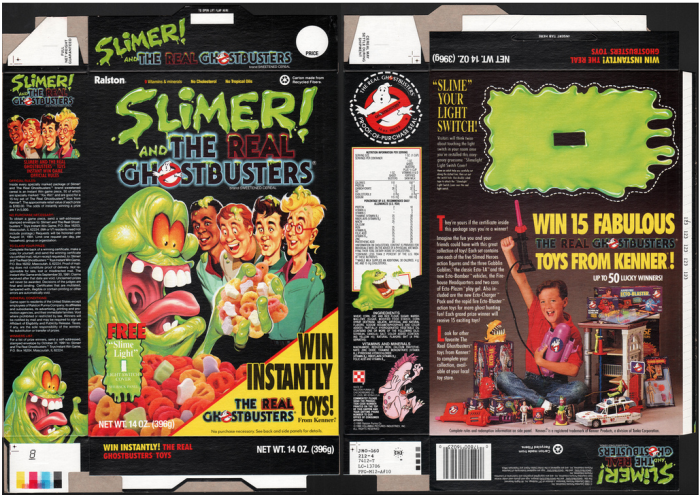 Whether you entered or actually won 15 Kenner The Real Ghostbusters toys because it could be related Ralston’s creative had a cardboard cutout “slime” light switch cover. Since even they put slime in quotation marks, the gimmick of glowing cardboard must have been so played yo.

It wasn’t originally planned this way, for length and time their will be one more Ghostbusters cereal premium/sweepstakes blog post. If you were a kid in the late ’80s I know it meant more to you then a college scholarship, a diamond, a Porsche, and yes even 15 Kenner RGBs toys.

The Real Ghostbusters Glow In The Dark Cereal Box Commercial

2 thoughts on “Ghostbusters Cereal: At A Premium”