When GHOSTBUSTERS II™ was headed for theatrical release Ghostbusters Incorporated, Ralston, and then Columbia Pictures mutually agreed to move forward from our Slimer! and The Real Ghostbusters cereal to fully concentrate on GHOSTBUSTERS II.™ With a soon to be blockbuster movie came product and cross promotions. The “sequel” version of our cereal was a natural fit. To be part of the bigger picture it needed more then a large “no ghost” sequel logo. Once it was planned out, the companies were taking a sequel sized gamble. If this didn’t work we couldn’t go back to giving away free gum, stickers, and Diamond Dazzle scopes.

Yes, kids who already loved GHOSTBUSTERS™ and ate formulamatic cereal had a chance to Meet A Real Ghostbuster. I’ll let that sink in for 25 years. As adults in the 21 Century we’re mostly smarter and we’re familiar with how movies are made. In 1989 if you were around my age (around 12) when GHOSTBUSTERS II™ was being filmed you really believed you could win a trip to the Firehouse and meet a Ghostbuster. 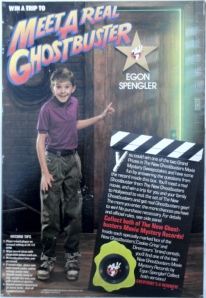 By entering the ‘Movie Mystery Sweepstakes’ kids had a chance to win a family trip to see the set (just one movie set?) and meet a Ghostbuster. Meeting only one of them didn’t make sense. If you were like me you believed you could meet one of the actors who played a Ghostbuster. When you turned the box around, we were lead to believe you had a chance to meet Egon. Not the one you’re thinking of.

Inside “specially-marked boxes” of  ‘New Ghostbusters’ (oh so that’s what they called it) Cookie Crisp, and Dinosaurs brand cereals were one of two Movie Mystery Sweepstakes records. Their was (as pictured above) a white version and a second gold color record. After cutting (most likely with adult supervision) away the square part of the record, you’d play either record ready to answer trivia questions. Which were asked to you by Maurice LaMarche, whose many voices included Egon Spengler in The Real Ghostbusters.

I still can remember my excitement with this grand sweepstakes and experiences with the records. I couldn’t wait to hear Egon talk to me, asking me Ghostbusters trivia! When I heard his voice, I was slightly disappointed, still amused to know it was a Egon, the one I heard and saw in the series on a weekly basis during the late ’80s. That wasn’t going to deter me from winning a trip to meet Egon. I still had high hopes it would definitely be Harold Ramis, who maybe was too busy with Ghostbusters II to play the entertainment category of Trivia Pursuit.

The records had a host who I suspect (without checking) is Rob Paulsen, whose many voice characters include Pinky, from Pinky and The Brain. The character’s friend is naturally The Brain, voiced by Maurice LaMarche. Who sounded remarkably similar to Egon. 🙂 We were told in a moment we’d have a chance to meet Egon from the Ghostbusters movie, first we had to answer 3 questions Egon was going to ask us later. How much later? I couldn’t just do whatever I wanted.

Immediately after Egon is introduced, he asks us if we were looking out for ghosts lately. I’m sure many of us answered, probably while we were talking he says ‘Great’ and moves on. Wait a minute I thought the 2 grand prizes was basically a family vacation to meet a Ghostbuster on a set. Now Egon is telling me I could be a honorary Ghostbuster and be part of the team! This is why Ralston and my future employer sent Ghostbusters kit for $1.50 and 1 proof of purchase. This sweepstakes keeps getting better! Egon confirms yes you and your family will meet him, Dr. Egon Spengler. Did two kids really meet Maurice LaMarche? I hope one of them didn’t end up in therapy.

Nervously (and maybe clue us in) Egon informs us it could be worse, we could meet Slimer. If it had been Harold Ramis’ voice, I might have thought I could actually check out Slimer from the films. Or meet Robin Shelby, if I had known about her then. Egon also confirms my suspicion that Ghostbusters II was in theaters (so the film had already been made) because clues to the questions come from it.

If you haven’t seen it yet, make plans to go right away. Its great. – Egon

Egon briefly tells us about Ghostbusters II ghosts and markets the movie to us. More of a Peter thing, which I wouldn’t have minded if it had been Lorenzo Music. When he’s finished laughing nervously at his second joke, their is a pause and Rob Paulsen returns. So Egon, how about those questions? I still might have homework to do.

Version 1 was far easier because questions 2 and 3 seem tricky. Hopefully creativity was taken into consideration. Yes, question 2 is a river of slime. The slime (and Vigo for that matter) wasn’t exactly “busted.” As for question 3, I’m still in my childhood. I don’t know what ward means without looking it up or asking my parents. Basically characters walking around NYC in the movie needed to be nice, if a park bench is chasing you, you better call the Ghostbusters.

With confidence in your answers you wrote them on a 3 x 5 card, sent them to their address and found things to do while you waited to hear from them. Similar to Ralston’s previous send away premiums and sweepstakes whatever the reason I’m pretty sure I didn’t enter. If I did I don’t remember. I know I didn’t win because a kid doesn’t forget a family trip to meet Egon, visit just one Ghostbusters set, and get real Ghostbusters gear.

This wasn’t the only Ghostbusters II™ food cross promotion with the chance to win something big. Coca~Cola and then Columbia Pictures ran a sweepstakes for someone to win a “modified replica of the Ghostbusters II Ectomobile.” Something that could be written about in a future update.

What are your memories of Ralston’s Ghostbusters II Movie Mystery Sweepstakes? If you beat the odds and won one of two grand prizes, I’d really like to hear about your experiences.