Towards the end of January we wrote that the Indianapolis Children’s Museum was preparing to display a screen used Proton Pack worn by Bill Murray. Part of there “You’re on the Set!” exhibit.

With the exhibit open, ghosthead Rob Zetzer took photos of the Ghostbusters display to share with fans and a fictional worldwide company.

Along with the previously mentioned screen used Proton Pack and Ghostbusters II Belt Gizmo, there was also a prop Star magazine and ‘Dr. Venkman’ business card.

To see all of Rob’s Indianapolis Ghostbusters photos, check out Imgur.

If you’re in the Indianapolis area and visit Indianapolis Children’s Museum the exhibit runs through July 26, 2015. 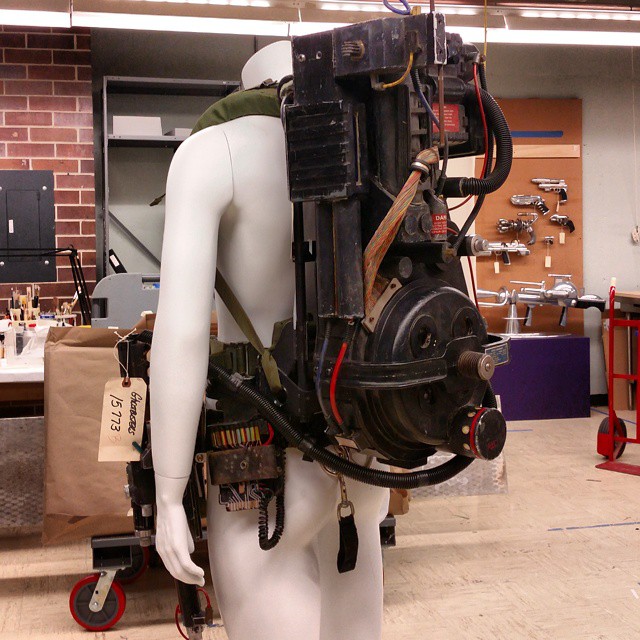 On March 1, 2014 after almost 5 months I was finally going to take my Tru-Spec flight suit and Ghostbusters patches to a professional tailor for sewing. Their hadn’t been a rush, of course now that I had a event coming up in a week, time was of the essence. Friend and colleague Bill had similar thoughts and wanted to come up to expedite our “business” needs for the upcoming Monster-Mania Con and other Ghostbusters NJ happenings.

I hadn’t had any personal experience with any tailors locally since I moved in 2009. I knew one local place and hopefully that would be good enough. The place we went to is near my sub division and probably does more business with seniors then nerds who want to see their childhood realized more in adulthood.

We explained the placement of the patches and the “patch” woman pinned them and even told us how she’ll strengthen them so the “no ghost” logo won’t bend. At the time their was a pending snow storm (Titan) which would probably close the shop on Monday. Our first con since 2006 was about a week away. The latest it might be ready is sometime on Saturday.

Maybe it would have never been that much, when they told us $12 USD, part of me wished I had brought the flight suit in last year. After being busy on day 4 and getting back around lunch, the tailors/dry cleaners called to let me know my jacket (for some reason they called the flight suit on Saturday a jacket. On a basic level we even called them coveralls) was ready.

I couldn’t wait to see it, without the boots which I didn’t have yet, I thought I’d have to wait until Thursday to wear them together. My only minor nitpick which I can’t see when I’m wearing the flight suit is how a little of the “strength” stitching is through the “no ghost” logo. Its possible the shop didn’t have the sewing capabilities to sew around instead of through the logo shape. Or an older woman with years of seamstress experience felt it was better to sew it that way. Which also would have been more then fine if she had changed color threads and used white. Its so minor in the end it doesn’t matter.

If you’re a ghosthead and/or built one I know the “daughter” board belongs on the back of the web/pistol belt. I moved it to the front for the picture.

I’ve talked about this last year, I’ve been wanting to upgrade my Belt Gizmo to be more screen accurate for years. Since Matty Collector hasn’t made one to buy, the time had to come to build one. What’s a Belt Gizmo? Its the basic name ghostheads came up with for the unnamed piece of Ghostbusters technology that kinda doesn’t have a technical purpose and isn’t explained in either Ghostbusters movies. The original Belt Gizmo came from a then current 1980′s Sanyo ICC-808D calculator. Today it could be the inside of a fruity robot cell phone.

In 2000 a ghosthead associate and I made our Belt Gizmos by using 1980s NES video game boards and computer technology. We could have cared less about calculators and Nixie tubes. 14 years later during the 30th Anniversary of Ghostbusters, I care A LOT about having an accurate looking Belt Gizmo that’s an important piece to the uniform. One could probably build a technical looking belt gizmo without a calculator. Ghosthead and prop builder Nick A Tron from the UK makes and sells Belt Gizmo kits. I didn’t order personally from him, Bill has and for working on our site, he bought a kit, had some real and fake Nixies, and put the Belt Gizmo together for me. We repurposed the ’80s computer cord/wire.

The tool pouch (if it wasn’t noticeable) comes from Sears, cost about $8 USD and has been modified to accommodate the “electronics” so it can “sit” in the pouch. I don’t know if the screen used versions used this additional method, Bill added velcro to the pouch and prop so it can be removed. Which has already been handy for repairs.

In Ghostbusters, not Ghostbusters II with the gray uniforms the flight suits have a leg hose connector which fits a yellow hose. Again, it isn’t talked about in the movies, the joke basically is like air force pilots and astronauts its a type of catheter. I’ve had clear hose going back to 2000 and Bill gave me some new clear hose. I haven’t dyed it yellow and never had yellow hose. You can buy pre-dyed yellow hose to length from Ghostbusters Fans.

Bill also gave me a resin leg hose connector. I still want to buy a rubber one, (can also be bought from Nick) which is what they were made of in Ghostbusters. They’re also sewn on, if we can find the right size magnets, we could have leg hose connectors which are removable. Better for keeping the linens clean long term.

Here’s a separate write up about my Bates side zip boots from Rich Collectibles.

If you new to putting together a Ghostbusters uniform, I wrote a handy article.