This past Ghostbusters Day (GBI Blog Post, June 7, 2018) with Wizard World seemingly dominating Ghostbusters 34th into 35th anniversaries activities we way overlooked to post about Spirit Halloween then upcoming Ghostbusters prop toys (and other) merchandise. We are poor business ghostheads associates Spirit Halloween. We should have pumpkin spice food & beverages in the near future.

END_OF_DOCUMENT_TOKEN_TO_BE_REPLACED 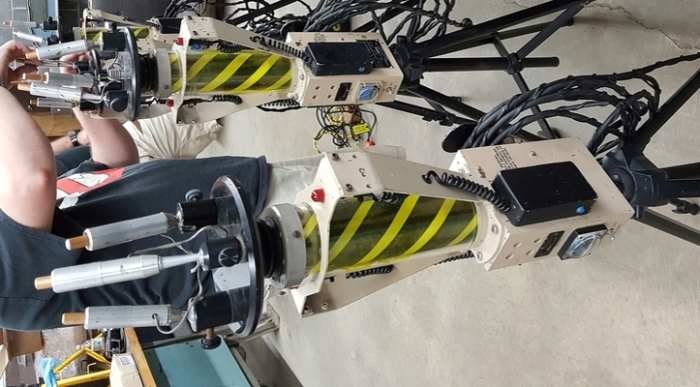 Sometime this year an auction company had a screen used prop from GHOSTBUSTERS II™. It’s a really good one too. Tripod Ghost Traps were rarely seen in either the film or by most Ghostbusters International employees.

Thanks to ghosthead Adam aka SabaSka109 more ghostheads can see detailed photos of this fascinating piece of Ghostbusters history. Due to major safety concerns and regulations GBI could never share schematics with the public. Which is a reason you don’t find many photos of these Tripod Ghost Traps.

Adam shared 8 photos and a video of his screen used Tripod Ghost Traps in a Ghostbusters Fans message board thread.

With the 3D files available to make one of your own 3D Ghost Traps, if you have the hardware and software, Sean and Norman have made a 50 minute assembly video. With our patents and IP fully protected by laws that HAD to be invented due note assembling a 3D Ghost Trap will not, we repeat WILL NOT function to catch any class of ghost.

Watch how the 3D-printed ghost trap project comes together in this step-by-step build tutorial! Sean puts together his ghost trap kit, explaining the design of each piece along the way. You can download the files for the print here, and buy hardware kits here. Thanks to Dremel for providing the 3D printer and tools for us to build this project! Learn more about the Dremel 3D Idea Builder here. 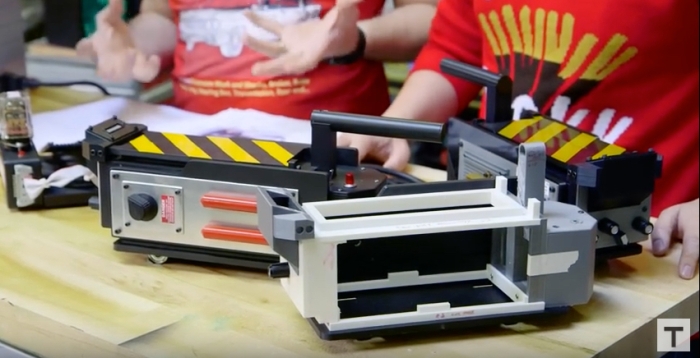 Sean Charlesworth and Norman Chan from Tested posted a video talking about a new 3D printed Ghost Trap. (GBI Blog Post, March 10, 2016) While that could have been it, the guys who could have a new career at Ghostbusters International made a 30 minute video going to the in-depths (my humor isn’t what got me this job) of their 3D printed Ghost Trap.

We’ve shown you Sean’s Ghost Trap replica prop, but there’s a lot more to talk about in terms of the 3D-printed model’s individual components, parts design, and electronics that brings it alive. It’s a kit designed for 3D printing and assembly, after all. Sean and Jeremy explain how they collaborated on the lights and sounds on the trap, which are appropriately activated by the 3d-printed pedal!

If you have access to a capable 3D printer Tested has provided the files for creating your own working, (remember, it doesn’t really catch ghosts because of our IP and the training it takes) 3D Ghost Trap.

A couple of the creative and intelligent folks at Tested (who aren’t busting myths) created a Ghostbusters/II Ghost Trap replica using computers, creativity, screws, (always need those) and a 3D printer.

This 3D Ghost Trap was designed and built by Sean Charlesworth. It works too, in the look, feel, and sounds, not actually catching ghosts. Let’s face it, catching ghosts should only be done by trained professionals. Also we own the patents would never allow anyone that should come work for us to build an actual working Ghost Trap.

If you have access to a 3D printer, Sean’s files will be available at a later time, if they aren’t already.

Ghosthead BaronVonJello recently finished designing a 3D Ghost Trap. The file will be used to be printed from the 3D printing community and company Shapeways.

Printable 3D files can be used for individual, non commercial use. END_OF_DOCUMENT_TOKEN_TO_BE_REPLACED

3D Printers and related software can be great for companies and individuals. For personal use, corporations like Ghostbusters Inc. don’t really want to see individuals printing our copyrighted and potentially dangerous (without proper training) equipment. We know the above Ghost Trap, printed by Phillip Avery (My Mini Factory) doesn’t actually work to catch paranormal entities. Eventually the technology will come far enough to replicate inferior operational equipment. Even if we authorized a label so we won’t be liable, we do and will have to look after our best interests. END_OF_DOCUMENT_TOKEN_TO_BE_REPLACED

In early 2012 I bought a Matty Collector Ghost Trap from a seller within my state. I took un-boxing photos almost immediately, didn’t do much with them. The intent was to upload them to Ecto-Containment and around that time write a review. Whatever the reason prior to “Superstorm” (right) Sandy I sat on them.

The first week of November two years later I finally decided to work with those original pictures and add them to Ecto-Containment. The review still needed to be written. With my sense of humor I made it seem like we’d see that in 2016. Before the review I realized I needed more detailed pictures. I took a new series of photos, uploaded on November 9 and on November 10 wrote a review of my Matty Collector Ghost Trap, which has been published to Ecto-Containment.

The only prop toy I haven’t reviewed is their P.K.E Meter. I could see covering it by the end of 2014, I’ll see how that goes.