Other Categories In Development

Thanks to ‘JoeGhostbuster’ for asking DST for a little more information.

We’ll be at New York Comic Con tomorrow. When you hear the #Ghostbusterstheme song, GO TOWARDS IT! #NYCCPUFT 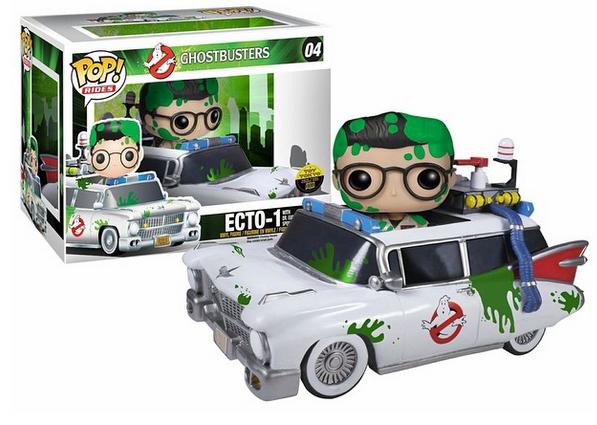 The week of October 9, 2014 the Javits Center is hosting New York Comic Con. Per usual there will be con exclusives. One of them from Funko is a variant of their Egon Spengler Movie Pop! and ECTO-1 Pop! that comes with Winston Zeddemore. As can be seen the NYCC Ghostbusters Pop! has Pop! Egon and Pop! ECTO-1 slimed in places. The artwork also appears different from the standard ECTO-1/Winston Pop!

What seems unusual is that unless we’re talking about Ghostbusters II,™ the character of Egon Spengler isn’t normally the one who gets slimed. Peter and Ray, for sure. This “combo” Pop! surely is unique. It’s possible Funko in a way wanted to honor Harold Ramis, who of course perfectly played Dr. Egon Spengler in both Ghostbusters™ and Ghostbusters II.™ Either that or someone at Funko wanted to do something different.

After all Funko had already done the SDCC slimed Pop! Peter Venkman with Pop! Slimer. Along with the SDCC “marshmallow covered” Pop! Ghostbusters. If the Pop! ECTO-1 was always going to be part of the NYCC exclusives, I would have done a marshmallow (different white or use a slightly dark outline) covered ECTO-1 and include a marshmallow covered Pop! Ray Stantz.

What do you think of Funko’s decision for a slimed Egon and Ecto-1?