Lake Forest, CA – Feb. 10, 2015 – The streams have been crossed and the Keymaster and the Gatekeeper have come together! Cryptozoic Entertainment, creators of board and collectible card games, is bringing the world’s most highly respected group of paranormal investigators/exterminators to the table top with Ghostbusters™: The Board Game. The Kickstarter begins today and runs through March 11. The game will begin shipping to backers across North America, the UK and all EU member countries, Australia and New Zealand in October 2015.

Are you troubled by strange noises in the middle of the night? Do you experience feelings of dread in your basement or attic? Have you or your family ever seen a spook, spectre, or ghost? If the answer is “yes,” then don’t wait another minute. Pick up the phone and call the professionals . .

Ghostbusters: The Board Game is an episodic adventure game for one to four players, who are charged with busting ghosts and sealing gates to the Spirit World. The game is customizable, cooperative, and highly re-playable. It features unique illustrations and figures based on original artwork and designs by Dan Schoening, the artist of IDW’s Ghostbusters comic book series. Each Ghostbuster has a distinct role and unlocks unique abilities by gaining experience. The game offers modes for different levels of players, making it accessible to beginners and challenging to experts. Now is your chance to save the world!

The Paranormal level pledge will get you the base game box, along with all applicable stretch goals unlocked during the campaign. 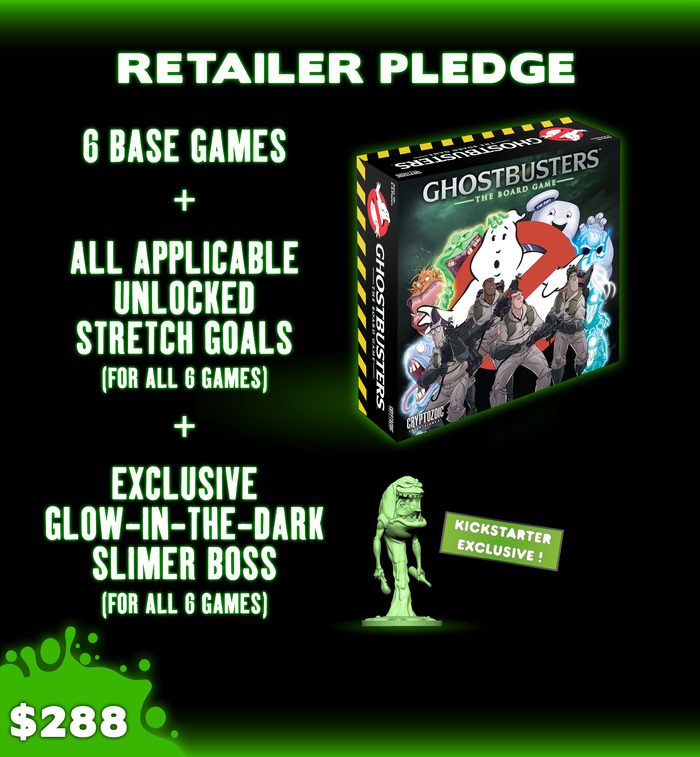 The Retailer level pledge is for verified retailers ONLY. We will message you to verify your sales license and store info. If we cannot verify your retailer status, we WILL refund your pledge. You get 6 copies of the base game box, 6 retailer-exclusive glow-in-the-dark Slimer figures, plus 6 copies of all applicable stretch goals.

Cats and dogs living together! That’s how amazing the planned stretch goals are. 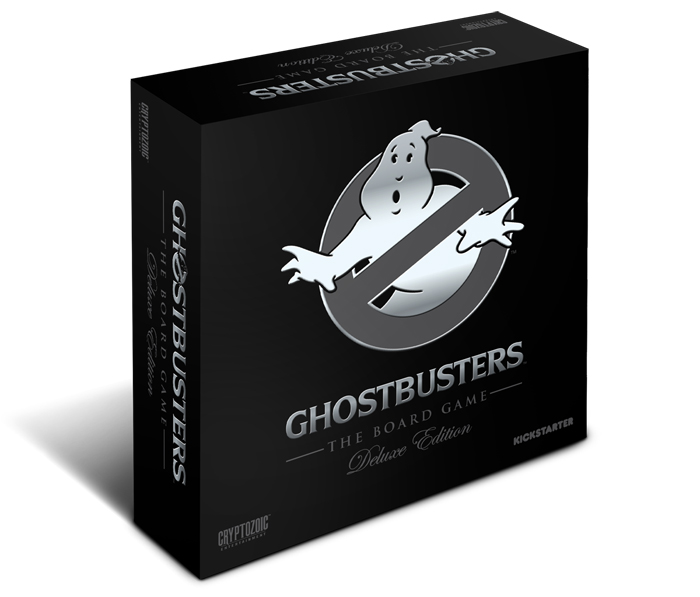 Up to 4 players take on the roles of the Ghostbusters and attempt to return balance between the Spirit World and ours, busting ghosts and sealing the gates from which they’re invading. Completing a scenario requires teamwork, planning, and resourcefulness. 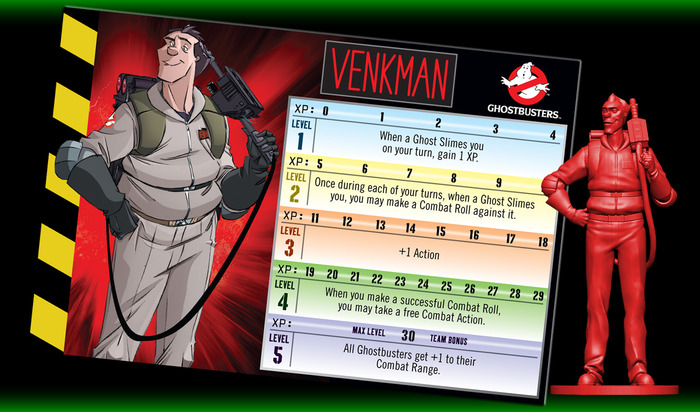 Peter Venkman is a risk-taker who does his best work in close proximity to ghosts.

Ray Stantz excels at removing slime from his fellow Ghostbusters. 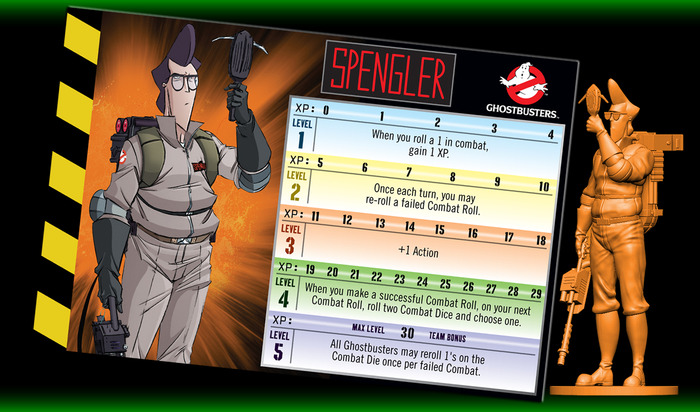 Egon Spengler is a wild man with his proton pack, but learns from his mistakes. 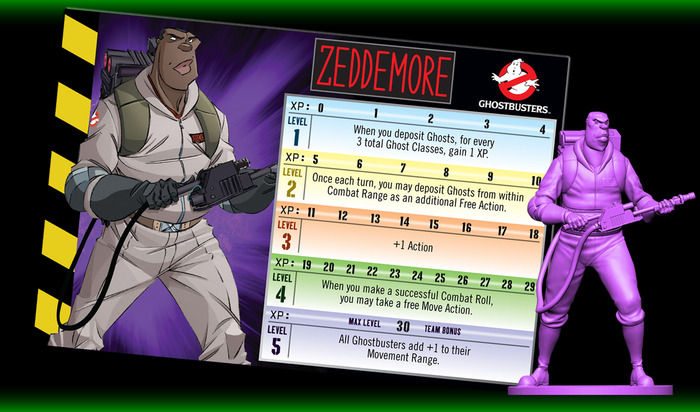 Winston Zeddemore aids the team by being the best at depositing trapped ghosts.

Featured ghosts from the movies, cartoons, comics, and toylines have unique abilities as well, in terms of how they move and react to your actions.

The game features 3 campaigns, each with 4 unique scenarios. It’s a fast-paced game: each scenario takes approximately 30 intense minutes to play. Every campaign concludes with an epic battle against an iconic boss character.

The game uses dice to resolve a lot of the action, so it’s never the same game twice! The three types of dice represent the proton packs and ghost traps, the unpredictable movements of the ghosts, and the chaotic activity of the gates. During each turn, players move, shoot proton streams, deposit trapped ghosts, use unique character abilities, and drive the Ecto-1 to complete objectives.

Each scenario’s map is constructed using double-sided tiles, featuring street and park imagery by the talented Robb Mommaerts. With a starter mode and a challenge mode, Ghostbusters: The Board Game will keep you enthralled for hours!

Here is a link to a Rules Primer to give you a bit of insight into specific scenario gameplay!

To create the best game possible, we’ve collaborated with some incredible people: game designers, avid game players, and Ghostbusters fans. This project is on Kickstarter because we want to make this game extra special for you. We want to provide you many ways to customize your experience with a selection of cool add-ons and Kickstarter exclusives you can’t get anywhere else, including a snazzier version of the game box design. And we can’t wait to announce some of the amazing stretch goals! Basically, you get the version of the game you want, and you get it before anyone else.
Risks and challenges.

The estimated delivery date for Ghostbusters: The Board Game is October 2015. However, please keep in mind that this is a projected date. As an experienced board game company, we at Cryptozoic know that unexpected delays can occur during the production and shipping of a game. We are committed to producing a high quality game and we will not take any shortcuts to make a specific date. Our goal is to send you the most amazing, perfect board game you’ve ever played.

In the highly unlikely event that we are not able to deliver the game for some unforeseeable, calamitous reason, we will refund all pledges.

Founded in 2010, Cryptozoic Entertainment, Inc. is a premier developer and publisher of original and licensed board games, card games, comics and trading cards, including the DC Comics™ Deck-Building Game, The Walking Dead™ Board Game, The Big Bang Theory: The Party Game and The Lookouts comic book. Following a philosophy and core principle of “Fans First,” the dedicated gamers and fans of the Cryptozoic Entertainment team are focused on producing fun and amazing products along with epic events that bring all gaming fans together as part of the Cryptozoic community. Visit www.cryptozoic.com for additional product and event information.

One thought on “Ghostbusters The Board Game By Cryptozoic Entertainment”